Something different to start the season on the dirt and after a chilly road trip to Spain on the Transalp, it was no warmer (4 C) as I left Bwlch with Paul to head down to Pendine.

I’d bought a Flat Tracker Yamaha on a whim after getting back from Morocco in January and the Bancyfelin organised Welsh short-track TT back on the beach at Pendine seemed a good place to use it.  I’d done a couple of grasstrack events last year and despite a pretty poor showing, they were good fun. 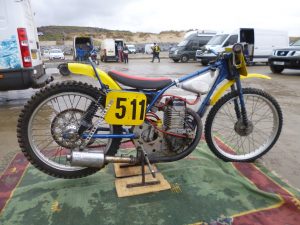 The Flat Tracker had seen minimal work and rather than trying to sort the SR motor that had come with the bike, I’d swapped in a relatively smokey XT engine I’d taken out of a motocross bike, which in turn I’d swapped in a sorted 540cc motor.  All a bit Paul Daniels, but after speaking with Rob Morgan at Telford, I’d decided the sand wasn’t going to be the place to run a neat, tidy bike just after a restoration, so hence the quick fix.  The bike was starting first kick with thump of a Briggs and Stratton.

The beach at Pendine was pretty full in the paddock and and a few chilly spectators waiting for racing. Dai Walker had made an appearance on his spare BSA with Rob Morgan getting his grassbike out also. Taking the XT out of the trailer and it was clear that a crack team of sand racers had descended from Mablethorpe for the event, with an oddball collection of bikes that have been made especially for the sand. What was noticeable was that noone else was running dirt track tyres except for me. 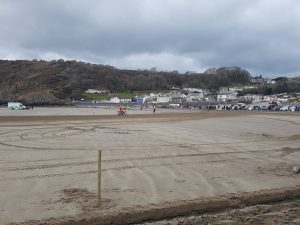 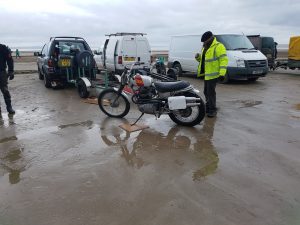 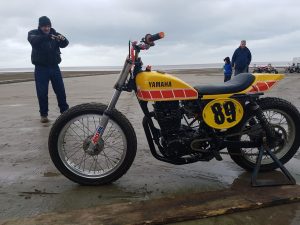 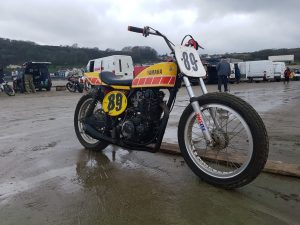 Guto Llewelyn went out on the JAP in practice where it died, but at least he made it, as my carb decided to play up and only resolved itself after a strip down, managed without dropping jets into the sand. Dai also had running issues and missed out on practice.

Needless to say, as predicted by Guto, a guy called Steve Lomas was quick on an odd looking XL500 Honda; ground clearance isn’t an issue for sand racers. There was a variety of interesting cornering techniques including the incredibly wide lines rather squaring corners did something closer to an isosceles trianle.  With help from Paul, I made it to the first race, where the true nature of the tyres (and rider) meant I took a timid line in the corners.  Even with the stock XT motor on points, the bike had pulling power and pretty lively. 2 laps done and the chain snapped, but good fun.

It turns out it wasn’t just the chain that snapped but the rear sprocket too. So off to find spanners and a split link that fitted (as the clip was missing from my toolbox, along with the right spanners; my excuse being I’d spent the previous 16 hours bad-in-bed-under-the-doctor).  Back out for race 2, with a 528 split link in a 520 chain and away from the start before once again the chain was off,  not split but as a result of the cracked rear sprocket.  Race 3, with a tightened chain and I finished, though not without incident and careful treading around corners with the slick tyres.

Rob’s grasstrack bike failed to start for the final which was shame as he had it cracked (with his main competitor failing to finish 2 races). Some great racing throughout the afternoon and a fair size crowd in a great location (not a hidden muddy field) and you do wonder with the use of a digger a place to run a classic beach race of some form. 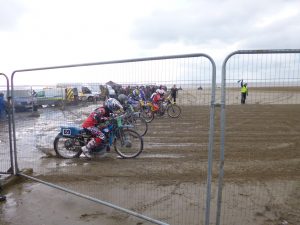 As with any bikes first run out a mixed back with the flat tracker and it’s left me wondering what to do with it; put something more knobbly on it to run on other Bancyfelin events seems the most likely, though the 19″ front and rears would be an interesting thing to run on the bike.  The exhaust weld held but as one of the many visitors to the paddock commented, did you use baked bean tin for the bracket. Plenty of other stuff to do, but I do have a spare sprocket I recovered the great Hockey’s clearout (along with a hundred weight of spokes) last year.

Roll on Teifiside next week so I can break some more bikes.

The Battle of Border