The track at Chester was laid out to avoid to the previous lines and as such was fast, flowing and pretty smooth. A well organised meeting with a pretty full paddock on what turned out to be scorching Sunday from the off. It’s a long trek up from South and West Wales and good to see many of the regular riders making an appearance.

In the main Twinshock race (the over 250cc and Welsh Championship) it was normal service resumed for Ben Weaver, though the presence of Chris Woodward meant he didn’t will all 3 motos. Not sure what happened to brother Sam in Race 1 but at the end of the day Ben had got his overall leave back in the Welsh Championship. Although there was a Dorset meeting, Matt Fry and Martin Kemp continued there Welsh Championship quest from the south coast and both scored well with Matt getting in a stand out ride in race 2 to claim 2nd behind Ben. Andy Mills relived former glories, guiding the Maico to 3rd, 5th and 6th and also scoring well. Bryan Wilkins on the 250cc Suzuki is heading up the the lower capacity bikes and rode consistently all day. Good to see the Browns out for a second meeting and the seasons rear-of-the-field clash between Kevin Petit and Lee Johnson continues to entertain will Kevin mindful he had a nightshift to get to after the meeting. 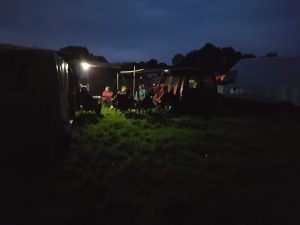 In the pre74 up to 250cc and pre68 up to 350cc raves, it wasn’t the biggest field of the season but it wasn’t the slowest either. Dan Evans on the parts-bin Husqvarna got the edge over Ben Weaver on the Elsinore winning 2 of the 3 races. (The parts-bin moniker can be traced back to Brendan Owen and Ryan would like it pointed out that a lot of spares have come from Jef Bens). William Guest it seems was a non starter on the CZ (and also didn’t see his dad in the Twinshocks either) , so Chris Lewis picked up good points. Sam Brice started well in each race with a 7th being his best result. Also good to see Paul Edwards get in a full set of racing on his Elsinore after a few false starts in his inaugural season. Also getting out for the first time in 2018 was Ed Willett on the TM250, and will be remembered for running out of fuel on the start line in the last race (and noticed by the commentator).

Tom Owen took 3rd in all 3 races and there took maximum points in the pre68 class; he’s going a lot quicker on the 350cc than he is on the larger bike it seems. Geoff Taylor has a working BSA and took 2 4ths and a 5th, with Malcolm Herbert taking 2 6ths after crashing in race 1, after getting too excited after a good start.

The pre78 race was combined with the lower capacity (non championship) twinshocks and James Edge, Simon Chamberlain, Will Rossouw and Mark Shaw turned out, with the main battle from Border between James and Simon continuing. Whilst the pre78 class does have some eligibility challenges it’s making for some great racing. With some additional interest in 125cc bikes it might be that any 125 twinshock be included in the class in future seasons.

In the over 250cc pre74 and over 350cc pre68 race it was competitive all day with Dan Evans battling it out with Brian Littler, John Cash and Keith Roden. After his ankle break at Red Marley (going down the hill not up it I understand), Nathan Jones took 3rd in the first race but didn’t make it out for the others. John Cash picked up a puncture in that race but got 2nd in race 2 before a possible lack of match fitness meant he was 4th in race 3. Keith Roden continues to find the 380 CZ better than the 250cc with 4,4,3 his results and Shaun Wilkins struggled for the first time though he was only behind rival Tom Owen in one race. Travelling Martin Kemp grabbed an excellent 6th in race 1 but was then off the pace for the other 2 motos. Need to check if William Guest was on the right bike (it sounded like his 250cc) but he was well off the pace in this competitive class.

Dai Walker came to watch but with his BSA awaiting a fix after his ECMO rides (he’s in 8th pace) it was up to others to take the points with Andy Davies not riding also. Joe Chell took maximum points again in a healthy pre60 line up and with Andy Carter getting a failed gearbox he narrowly takes the overall lead in the championship.

Derek Brice rode consistently after a slow start in race 2 and whilst Chris Dean took the overall points on the day, it sets Derek up well for the championship. Both Mark Abbott and Matt Morgan rode consistently and remain in competitive spots for the season.

For me it was nice to travel on Saturday night with Kevin and Karl and though it rained pretty heavily while we were at the track great to have a couple of beers and play some music badly. For sure one of the memorable days in my relatively short and unillustrious classic MX career. Whilst sitting on an Easyjet flight to Alicante it’s my shoulder (from my first race crash) that’s the main physical reminder, it’s the incident during practice that will stay with me. A racing incident incurred though bad judgement or bad luck is just that and that’s where it’s normally left. 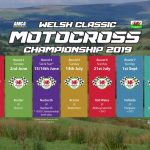