I’ve said it plenty of times, but a meeting at Teifiside captures what is best about classic motocross. People riding for the enjoyment of bikes and competition at  different levels, coupled with a great setting and good banter in the paddock.

The August edition of Teifiside is usually quieter than the April one, as there are competing events and people are also are on holiday (though a holiday on the Cardigan cost is hard to beat). The long hot summer was spluttering to a halt and the weekend brought colder, wetter weather, but by being on the littoral plane between the Irish Sea and Prescelli Hills kept the track at Crugmore Farm relatively dry all weekend.

Entries for the weekend were not great, though better than some Teifiside meetings of old and ended up with 75 solos, including a support modern class. With people travelling from the north west of England and the home counties, those in the know understand that Teifiside cannot be beaten for atmosphere.

With my parents staying the area, we’d made a weekend of it, so Friday night saw us at the track with an acquired dog and 2 other campers (Simon Chamberlain and Steve Gregson, the latter coming down from Preston).  I’d plotted a Saturday afternoon up at Bancyfelin’s grasstrack meeting so as to test out the 400 Cross Husky I’m building but ended up bailing out as the weather on the mountain above Crymych wasn’t pleasant. Ended up in Caffi Beca, which is on the Narberth to Cardigan road  and well worth a visit. Named after one of the more infamous parts of Welsh (and British) history, where men proudly dressed up as women.

With the usual suspects beginning to arrive on the Saturday evening, there seems to be a developing entourage of musical (or in my case non-musical) inclined people and with two fires it was just about warm enough to fend off the stiff breeze. Plenty of discussion around the forthcoming trip to the Czech Republic and MXdN, with organisation still to be done though the core parts of the logistics are now done.

Breezy overnight and though heavy cloud there was no rain during the day and even the sun arrived at the end of afternoon. Practice at 10.45 and racing started promptly and even the famous Teifiside commentator was on time, though he managed to fall behind by one race later on. Great new PA system was provided, by a setup who also provided a bar, though the weather might have put off some spectators there was still a reasonable crowd.

In the pre65 race, Tim Harper (who was part of a healthy Moseley Club contingent) stayed in front of Phil Edwards, who’s own charge to the pre65 title hasn’t been halted by blowing up his main bike at the Bonanza a few weeks before. Tim was riding out of class (as he also ran in the Evo races and wanted to avoid back-to-back rides), so it was maximum points again to Phil, who’s all but secured the title. Whilst its theorectically possible for Derek Brice to win, losing 15 points to Phil at Teifiside didn’t help his case, though he does extend his lead over a much quicker Mark Abbot, who has also put most of the reliability gremlins aside for 2018 and lies in 3rd overall.

Jon Britton moved to the top of the pre60 class, primarily because the other challengers preferred their sidecars in Somerset (and £25 per race rather £5-10 at Teifiside). Whilst it’s unlikely that’ll hang on to it at Llanthony at the end of September, it’s put in him in a certain spot for a top 3 and a good chance of 2nd.  The Welsh Championship scoring system does reward wins and quick riders, as the points differences decrease down through the field, but also regular appearances and consistency also mean you are well placed at the end of the season.  It’s common in other championship, for attendance to dwindle once people work out they aren’t going to win anything; trophies to lower places and rewards for turning up are all part of the Welsh Championship ethos.

I might have quoted this before but Danish philosopher Soren Kierkegaard said that the reward for people who win all the time is much less than those who can improve from lowly places. Without mentioning names, there are plenty of people who get a lot of satisfaction from finding their own race down the field and eventually beating someone they consistently found themselves behind.  It makes their day, week and potentially season. It’s a good formula.

In the pre68 up to 350cc,  Tom Owen secured the title, with Malcolm Herbert staying ahead of Geoff Taylor in the overall points, but failing to stay with him on the track at Penparc.  In the combined race, it was the returning Chris Storey on the Elsinore who stole the show, blitzing Dan Evans into 2nd place. Speaking with Dan during the lunch break he said how quick Chris was going and managing to hang on to the bike well outside of the racing line on some of the corners. Good to see him back and hopefully more from him next season.  Dan had secured the title at Abbeycwmhir, but with Ben Weaver injured since before Acorns and Keith Roden deciding to focus on the over 250cc class, current 4th and 5th placed riders, Sam’s Gittoes and Brice are in effect battling it out for  3rd overall (I suspect 3rd as Ben is likely to return at Llanthony but he’s not going to change his position). On Teifiside form, the improving Sam Brice needs a really good ride to beat Sam Gittoes, so it might be down to who finishes all 3 races. If the conditions at Home Farm are like last year, could be a tough race or two to finish.

In the over 350cc pre68 class things couldn’t be tighter at the top. As at Acorns, Sean Wilkins BSA didn’t want to race, breaking an engine mounting bolt during practice. Travelling down with Dai Walker, who decided not to race, the decision was made to swap bolts but in the end it was swapping bikes. Sean seemed to go well on Dai’s other BSA and managed to take 8 points from Tom Owen, who’s looking to complete the pre68 double in 2018.  Even though John Cash has been retrospectively scored in the right class for the season, and took the overall win on the day, it’s down to Tom and Sean for the title, with only 1 point in it going to Llanthony. All to play for and promises to be some good racing again.  Rob Walls consistency (with the exception of Acorns) has really helped with his totals this season and 4th place looks likely; also good to see him battling it out with Rob Morgan, again proving the adage that there’s good racing all through the field.

In the over 250cc pre74 class, Dan Evans took 3 straight wins, though he was beaten by John Cash in the last race (again combined classes). Mathematically he can be beaten by Keith Roden for the title (who himself is ensured of 2nd place after another solid day at Teifiside) . Glyn Drake on the Yamaha MX360 has rode consistently and had a great season and as such is going to be third irrespective of results at the final round. Steve Gregson made the long trip down to ride his CCM, which he did so consistently to finish 6th in each race.  After a bit of tuning after practice (which involved Kevin Pettit showing him how far the throttle opens), Karl ‘monoshock’ Stevens managed some good results on the TM400 after what has been a stop-start season.

In the Twinshocks, the battle for the Championship remains wide open, with 8 riders still in contention for trophies. Whilst this is part down to the injuries sustained by Ben and Sam Weaver whilst riding this season, it also as much to do with the renewed health of the class, despite the accompanying rise of the pre78 class as well.  Rhys Edwards dominated on the day, with Bryan Wilkins, Dai Clack and Nigel Davies all picking up points, along with Maico mounted Dylan Davies and Andy Mills.  Some great racing all day in class and good to see it so competitive again.

In the pre78’s, James Edge took the overall win, with Simon Chamberlain only recording one race win and a relatively lowly result in race 3. Alan Woods rode consistently battling it out with the Twinshocks to also get some great points. It’s looking like these 3 riders for the pre78 honours this season along with Mark Shaw, who has battled away all season for points, along with Will Rossouw who might be able to grab a trophy by the end of the season.

The Evo season was rounded off with Daniel Griffiths winning on the day, but it was Rhys Edwards who once again took the title for the season with Glyn Drake in 3rd. Though there have been two additional rounds (at Mid Wales), entries haven’t been great or as consistent as the other new class, the pre78’s.  Some thought needs to go into plans for the next and future season.

Overall an excellent day, with racing done by 4pm under brightening skies and improving conditions. The Penparc track is small and rough but it provides some excellent racing, especially with the enthusiasm and management of the Teifiside club. The August meeting remains one of my favourite of the year; biggest isn’t always best. 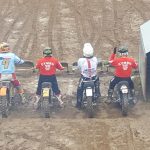