With a winter of expectation before the event, interest and enthusiasm were evidently apparent at Penparc for the 1st round of the 2019 Classic MX Wales championship.

With over 150 entries, it was by far the biggest event for the Teifiside club since I’ve been riding and well up on the 70-80 entry that has been more usual in recent years. Whilst the arrival of the Twinshock 125 and promotion of the Evo class had contributed 40+ riders, there was also strong support from the Twinshock and Classic riders. The word around both the Welsh Championship and the Teifiside meeting was continuing to spread.

It wasn’t the warmest of weekends, with a strong easterly wind keeping everything chilled, even my home brewed mild that had made the journey down from Bwlch (for more on the brewing efforts see the coreofthepoodle.com website). Saturday afternoon saw myself and Karl Stevens head up to Penparc and to a relatively empty site, partly to walk the track and help if needed with any further set-up. As the venue filled up, we got to meet new faces and old. We managed to coax some riders to have their picture taken next to the sponsor banner, in return for the new Registered Rider sticker. It is always great to put faces to names, especially where there are so many new ones around.

As the temperature dropped, so did the flow of people around the paddock, so Karl and I beat a hasty retreat back to Clarbeston Road and a warm fire, to dwell on the possibilities for the morrow and the advent of a new season of racing.

Sunday opened chilly and stayed that way, with only a slight let up in the wind and the appearance of the sun late in the afternoon. The Teifiside club was well prepared for the large entry that by 9am had filled up the paddock nicely.

A short riders briefing led straight away into 4 practice sessions ordered by class, which despite the number of riders passed off without any incident. The mix of the red mist of the 6 months without a race and the fear of blowing up the bike in the first practice balanced themselves out to ensure a smooth session on the excellent Penparc track.

The Teifiside club had kept the track as it was in August last year, which flowed well and some grading had meant it was able to handle the 500 odd bikes that went round the track on Sunday afternoon.

The Pre60 / Pre65 class, Pete Hollinshead undertook his early season masterclass, on the BSA twin, blasting his way to 3 race wins. Pre65 Champion from 2018, Phil Edwards scored a maximum in 2 races but with a DNF, so George Gorvett headed the points for the pre65 class on his 350cc B40 BSA. The much debated decision at the AMCA AGM to move all BSA 441 Victors from Pre65 to Pre68 has had an impact and something will need to be done to get them racing in Wales. George had left his at home.

For the combined pre68 / pre74 lower capacity class, the long journey to South West Wales was made once again by Kris Winder, along with Elsinore74 team mates, Andy Hinchcliffe and Aaron Dent. Chris Lewis seemed to have planned and all out assault on the meeting and the Welsh Championship with Ben Weaver only getting 4th behind Kris and Andy. Husqvarna mounted Dan Evans looking a bit rusty after the winter break taking 4th spot. Dorset visitor Gary Warr brought some much needed diversify to the track with his Ossa. Nice to see Keith Lessiter on a bike rather than with a flag in his hand and the Yamaha MX250 looked and sounded great. Mitchell Harris battled well for pre68 lead, with Geoff Taylor doubling up on the BSA after riding the Twinport CZ in the pre65s. Also good to see Vince Hale back for the 2019 season.

Mitchell also took class honours in the Pre65 over 350cc class, though John Cash did win the first moto. Sean Wilkins bike gremlins didn’t travel down from Merthyr after the cruelty of Llanthony last September and he’s on the pace this season too. Tom Owen didn’t ride after a recent off and some broken bones to repair, leaving both pre68 classes wide open.

The Pre74 over 250cc race saw William Guest getting the hang of the 380cc CZ after moving to it last season. Some stylish riding saw him take 2 race wins, ahead of some pretty good riders, Dan Evans included. This season sees the return of Nathan Jones after last years broken ankle and despite a missing swingarm nut rode steadily to take 3rd overall. Sam Gittoes rode 2 motos only, so Karl Stevens took 4th overall on the day, ahead of riders that were comprehensively beating him a couple of seasons ago.

In the Twinshock A race, it was Andy Hinchcliffe on the Honda that took the honours after a good set of battles with Yamaha mounted Jim Shand. The 125cc series had been much anticipated after a closed-season promotion effort from Alan Woods, one that Formula 1 would have been proud of (given the budget). A good mix of riders, some who were making comebacks much more impressive than Tiger Woods win at Augusta on the same day.

The beginning of the season had seen some speculation that the attrition rate for the 125s might be high, with the market for pistons and rings hotting up considerably as the season progressed. However, no one expected it to happen quite so quickly, as 19 riders in race 1 soon become 11 riders in races 2 & 3. As with my own experience with the Husky on the day, lots of prep, and some field practice still doesn’t mitigate against system failures on race day #1.

Some of the Twinshock 125cc riders had elected to enter in the B race, which ran with the pre78 class. Bob Amphlett took the overall win, though Gary Wilson moved down from the A race for the last moto and beat him to the line.

The pre78 didn’t have the strongest entry, but Chris Woodward, also riding a Twinshock, along with Iwan Rees looked strong and held off Guto Llewelyn for 3rd overall. In contrast to much of the Twinshock 125cc and Evo bikes coming into the championship season, Guto’s Yamaha YZ250D (I think), still carried much of the patina it had when it was recovered from the autojumble at Telford a couple of years ago. Still going well though !

It was a full line up for the Twinshock class, with 30 on the line for race 1 and Jim Shand, Ben Weaver and Chris Woodward battled it out for the honours on the day, with Jim taking the win by a single point. Whilst the Penparc track isn’t the biggest, there were not too many problems with the sensible track layout and sensible riding. With both familiar names from seasons past, like Andy Mills and John Tillson, also good to see newer names like Zac King and Chris Woodward in the top 5. Matt Fry and Martin Kemp travelled up from the South Coast as per last season and with the south / south west now running 4-5 classes of Twinshocks per meeting, we may seen entries in the class increasing. Local lads Kyle and Keelan Noble also had a run out on the day and placed well and here’s hoping for a full season for them for 2019.

As with the Twinshock 125 Class, the Evo championship had seen some promotion during the closed season, so much so that with 19 riders on the line, this was as many as had been seen in the whole championship last year. Some quick racing saw Andy Gillett, Brett Hillman and Kip Herring battling it out for the top spots in each race, with Kip just taking the overall on the day. As the Beriano rider for 2019, with Rhys Edwards recovering from both a serious injury and fatherhood, the big question for the season will be bike reliability. Good to see Connor Jones back classic racing, though his foray was limited to Race 1 after the CR500 packed up. The only negative point to the day, was Greg Thomas’ accident in Race 1 of the Evo, just before the finish. A broken shoulder and a few ribs and he’s spent the week in hospital in Carmarthen, a shame given he recent decided to start racing again. Look forward to seeing him again soon. Well done to the St John’s Ambulance on the day.

Overall, despite the cold weather an amazing days racing and perhaps now the word is finally out, that Teifiside is one of the best places to go racing. Despite near doubling of entries from a couple of seasons ago, it still has the right feel and atmosphere for racing. Re-reading one of my blog posts from 2010 it does make you wonder how things have changed, and these should always be considered for the better.

Results from Teifiside are below, select the sheet from the Google form. The current series standings can be found here. 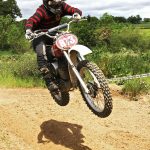 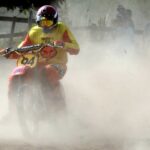 Chester : Round 4 2021 : Results and Current Standings