With a record breaking entry of over 150 riders, even a shower of rain half way through the 3rd block couldn’t  dampen spirits on what was an excellent day for racers and spectators.

With online entries, plenty of promotion and the continued enthusiasm for the 2019 season, it meant that the 5 weeks since Teifiside had only continued to build the excitement on the day and it was a record breaking entry at Abbeycwmhir for Round 2 of the Welsh Championship.

The Saturday night wasn’t the warmest so despite a packed paddock many had already retired to their campers (or tents or backs of vans) by 10.30pm, ready to dream of a holeshot or a race win. The track was fast and flowing as usual and rock hard (not usual) and the Mid Wales club had done an excellent job setting up and running the event.

The only blip on the day was the late appearance of the St John’s Ambulance, but they stirred from their beds with a phone call from Sharon Stringer with only a short delay. From then on all went smoothly with no serious racing incidents or problems.

As with all meetings I am riding as well as watching so reports also based on the results and comments from others who are watching. Ed Willett has a shoulder injury so has moved from rider to promoter/svengali to Alistair Devall and as such managed to watch a few races.

For the Twinshocks there was once again a healthy line up of 25 riders [1] but not that many who’d ridden at Teifiside. Therefore it meant that Ben Weaver’s wins at Abbeycwmhir allowed him to move well ahead of his other 2019 championship contenders even at this early stage. With the South Coast contingent at Drumlarig Castle, there was scope for others to get points, though once again Ben Weaver took overall honours. The continued resurgence to the Twinshock class may not match the 150+ turning up to the meetings in the South West but with 3 classes, with the pre78s and 125s), there is healthy representation without swamping the classic classes.

For the pre78 / Twinshock 125B races is was all about Bob Amphlett who took the race wins and as such has promoted himself up to the A’ s. After a sterling performance on the modified TS125 special, Alistair Devall was mounted on Ed Willetts very original TM125 and his 4th place in race 3 showed both improvement and an ability to tackle the greasy conditions brought about by a brief shower after the lunch break. He was behind Alan Woods and Guto Llewellyn who had some great races to head the pre78 classes.

The rain (which arrived during race 2 in the last block) had impact on the last 5 races and so much that the reduced number of starters and those riders who revell in the challenge come to the fore. Double win for them in terms of championship points.

The pre60 / pre65 race had a good line up with Pete Hollinshead and Phil Edwards once again taking the overall points in their classes and fighting it out at the head of the field, though the track suited Pete’s machine and style well. The Abbeycwmhir track is big and flowing but it was commented on by some that it’s not the easiest track to pass on and the racing line is relatively narrow. It was pretty slippery early on and improved as the grass came off, though it defaulted back to ice rink whence the rain came. Jim Pickering’s first outing of the season saw him placed in 3rd ahead of George Gorvett.

The Twinshock 125 A races provided some great spectator viewing and a very different sound to the 4 stroke dominated race before. With 3 different race winners and Jim Shand and Andy Hinchcliff (2nd and 1st from Teifiside) not present, there is plenty of movement in the standings. Sean McRea won race 1 on the well prepped Suzuki, but he couldn’t hold off a well motivated John Cash who started well and executed some excellent overtakes to win race 2. Race 2 was all about James Edge. Coming to terms with the competition that’s arrived in Wales this year, he ripped away from the start and managed the rain affected track better than anyone else. Whilst the pre race and practice casualties had an impact on the number of the riders starting, the pre season hype is currently being met.

Without doubt the quickest and most intense battles on the day were in the Evo class, with the top 3 from Teifiside continuing where they left off , but with Andrew Gillet taking the honours over Kip Herring and Brett Hillman. Whilst Evo have there detractors, both the quality of the racing and the numbers of the line have really added to both championship meetings so far this year. Connor Jones took 4th overall ahead of Nigel Davies and Steve Gray. Series sponsor Daniel Griffiths improved as the day went on and took 7th overall.

The Pre68 over 350cc class had it’s own race, run separately from the Pre74’s with Rob Jones showing both class and local knowledge to win all 3 races ahead of Mitchell Harris and Sean Wilkins; Sean did sneak a 2nd place in the last race, where being from Merthyr Tydfil means your get plenty of chances to hone your skills in the rain.

With sad passing of Nikki Lauda on the day following the race, it’s good to see the spirit of his great 1970s friendship and rivalry live on the pre74 over 250cc as Ian Hall and Karl Stevens battle it out. A coming together in race meant that once again Karl was racing with a single shock and the timely provision of a set of JT shocks from Malcolm Herbert’s trailer (just returned by Ed Willett from another project) meant that he could continue racing. Meanwhile at the front of the race, Chris Chell took the honours ahead of Dan Evans, though Dan took the victory in the last wet race.

As always, the disappointment is that you don’t get a chance to talk to everyone at the event, so always willing to chat to every one and catch up on racing, bikes and anything.

In the end, the sun came back out before 5pm and as the last race was run. 27 excellent races run and a great job down by the Mid Wales Club, who will be doing it all again in July.  The amount of work that goes into running an event is understood by many who race with the AMCA, and the more successful an event, the more the work increases.

With entries of around 150 at both Teifiside and Mid Wales, it’s been a tremendous start to the 2019 season and whilst entries will get lower as the season progresses, it’s already going to be a record breaking year for classic motocross in Wales.

[1] One of the issues there seems to be is riders entering multiple classes but then not racing them all, leaving a hole on the line. This may mean at busy events that some riders may not get an entry at an event. 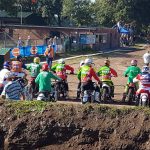