The Big Weekend came and went, but the rain came and stayed on the Sunday (as last year). Track conditions weren’t as bad they could have been, but the wet weather riders had a good opportunity to show their class. The Narberth weekend from a poorly attended beginning has become the go-to event in the Welsh calendar.

With over 200 entries (as last year), the combination of the modern Stuart Davies races on Saturday and the classics on Sunday meant there was a full paddock and an action packed weekend. More on that later. The Pre83 125cc Partridge Ventilation series were also welcome visitors, combining well with the Welsh Championship 125cc races.

On the Saturday, the Classics were split by age group (above and below 50) and responding to the wet forecast and the promise of a greasy track, Ponsticill’s Dai Walker made the trip down and promptly won the first race and the Lee Robins Memorial Trophy. Gary Warr is a keen supporter on the Welsh Championship this year on his Ossa’s and he took 2nd overall, ahead of David Weaver on the Elsinore borrowed from son Ben.

The Evo championship was run on both Saturday and Sunday, with the main 3 contenders battling it out. Kip Herring winning out overall from Andy Gillett and Brett Hillman after more close and exciting racing. With other riders focusing -on the Stuart Davies races, valuable points were scored as the track was got better as the afternoon went on. With Brett and Andy not racing on Sunday, Kip managed to pile in another 3 race wins and 105 points, so opening up a big lead in the Evo series. Given he’s riding the Beriano Yamaha, having a buffer against the odd mechanical is no bad thing. As with the other classes, riders on the line for Sunday’s racing was somewhat down on what the entry promised, with one mind on the couple of hours that would be needed to clean the bike afterwards.

Along with Dai Walker’s decision to race, it’s not a surprise that the West Wales natives seem to ride well in the wet and muddy conditions, with Guto Llewelyn taking the overall in the Pre78 Class, Alistair Devall with the Twinshock 125 B’s and nearly (oh so nearly) Keelan Noble, who was making a return to the Twinshock open class. Guto’s YZ125D will need some new suspension after it took a hammering on the well worn track. Smaller, lower bikes, like Pre78 machines, work well in the wet and the ruts, where you can get your feet down and you don’t have too much power. Alan Woods YZ125D got off the line as in previous rounds and got the holeshot in races 1 and 2, though Malcolm Herbert’s Husqvarna Automatic got the grip in race 3 and managed the lead through the first few corners until the excitement got the better of him and he fell off. Alistair Devall, riding Ed Willett’s TM125 was the sensation of the afternoon, and whilst disappearing between some of the braking ridges left round the track, the little bike managed to take the race 3 win, after the afternoon rain had hit the last block.

In the lower capacity pre74 class, Guto Llewelyn (that man again) had to get a foot peg welded, before getting out and showing the way round in the 2nd block, but it was Gary Warr that took the overall, after championship leader Dan Evans suffered bike problems, only completing race 1. Sam Gittoes rode consistently all day (as at Bicton) and after 4 rounds finds himself in 2nd place in the championship, only a few points behind Dan. Keith Lessiter has decided to ride his Yamaha MX250 this season, rather than acting as clerk of the course and his commitment and consistency has seen him move up to 4th overall in a very different pre74 up to 250cc championship this season.

In the Pre60 / Pre65 races, great to see Nick and Toby Richards come up from Cornwall and ride some excellent races on both days and especially good to see given the state of the track by Sunday afternoon. Toby took the overall on his grandads bike, something that was great to see. In the pre65’s Geoff Taylor won overall, but Matt Morgan had 3 consistent rides and after Phil Edwards rode Saturday, he didn’t ride on Sunday, so Matt moves into 1st place in the championship but will have a battle on to keep this over the next 5 rounds.

In the Twinshock races, Keelan Noble took the 1st race by some considerable distance and an upset was on the cards. However both Ben Weaver and Kyle Godbear came back strongly in the other motos to also score good points. Ben took the overall victory and extends his Twinshock championship lead. The slower conditions favoured experience and Dylan Davies and David Weaver kept ahead of Joel Edwards, who’d made a blistering start to the season.

Andy Hinchcliffe didn’t win all of the combined Twinshock 125 / Pre83 races but did take maximum points for the championship, with series leader Sean McRea not enjoying the conditions. It was tough on the smaller capacity bikes and James Bartholomew’s return to the series was well rewarded with 3 good results; only Ian Knight managed 3 finishes.

In the pre68 over 350cc / pre74 over 250cc combined race Dan Evans didn’t have any bike problems and won all 3 races and took maximum points, with Sam Weaver coming back from the wilderness on his Maico to push him all the way. Describing his fitness regime on Saturday, Sam outlined the challenges of modern motocross. The details aren’t reportable here, but it’s an approach that would hospitalise many an older rider. Keith Roden made his first outing of the season on the 380cc CZ and showed some class in push the other contenders all the way. Of the pre68 riders, Mitchell Harris only finished two races, but Sean Wilkins also only made two starts, so took the overall win.

Results can be found here as a PDF.

Some further observations of the meetings have written up in a separate report. 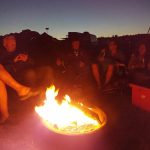 Tea and refreshments are available !