Following on from Bicton, some of own enjoyment of getting a couple of good results were in part tempered by some (justified) concerns about the track and the riding styles it resulted in. Also, it was pointed out that a rider was riding a bike out-of-class, ie in the wrong race. The additional effort of running the championship this year has to date been fine, given the increase in entries and the chance to meet and race against a new group of riders.

I really appreciate the comments and support about the work I’m doing for the championship and the effort the different clubs are putting in to run the meetings. Border’s decision to run anyway and take a chance on the numbers, may mean they have made a loss on the meeting, but around 90 riders got the chance to race. However, following on from the Narberth meeting, there’s a few things we’ll need to consider as riders and supporters of classic motorsport. It’s made me think further and also take a couple of actions to preserve the integrity of the championship and classic motocross.

I didn’t get much sleep in the paddock on Friday night, partly because the generator running nearby only ran out of fuel sometime after 3am. Therefore the promise of a warm bed and a good nights sleep mean that I didn’t need much cajouling to not stay at the track on Saturday night. Coming back to the track on Sunday morning, along side the reports of a good night with good music, there were tales of fighting, lots of noise through till the night and incidents with people getting into other peoples vans and caravans. Since then, a few people have said they won’t come back next year, as they didn’t enjoy the atmosphere.

Is it a classic v modern motocross thing or generational difference of what a good night is ? Not sure, but while the racing was all good and the camaraderie on the track seemed as good as ever, there was something else going on. The rest of this post might seem a bit negative, but it needs to be done and with the responsibility for running the Welsh Championship it needs to be said. It’s all good getting new riders at events, but if we are losing riders more quickly then there’s a problem.

There are rules, those set by the AMCA, those from clubs and those from the Welsh Championship. Rules are rules and we all bend or break them at times and doing so may not impact you. But it’s likely to impact others, who are usually silent and not willing to cause trouble. So, for those riders riding round the paddock with their kids on their bikes or sidecars, or riding round without a helmet or too quickly in areas where there are kids playing, it’s down to use to understand and realise the potential impact on others. All of these happened over the weekend, they can’t be policed easily and people don’t want the confrontation.

So, I’ve taken some actions following the weekend which are limited only to the Welsh Championship, as the Club can make their own judgement on what they want to do.

I’ve not scored points for one rider’s only finish on Sunday, as along with his friends he decided to chuck his litter in the hedge rather than pick it up when asked to do so by a couple of other riders at the end of the meeting. Those riders then retrieved it from the hedge and then also got the pleasure of more rubbish being thrown out of his car as it overtook them on the way home. He has said it didn’t happen but there other, more responsible people, who say it did. If he doesn’t like my decision, then fine, he doesn’t have to ride in the championship. Keeping tracks and venues means acting responsibly. There is another rider who volunteers in the Brecon Beacons National Park, picking up roadside litter and I’m amazed about the volume of crap and the thoughtless of people out there. This makes it even more demoralising. There was another rider who left all his crap behind (in a one ton builder’s bag) and the Narberth club will be dealing with it.

What is a shame, is that had I got a spare head gasket for a CZ then I would have lent it to his father when he asked earlier in the day. It makes it all more disappointing in that you spend your free time supporting something that people simply don’t respect.

Another rider clearly rode one bike all weekend, rather the two bikes so that he could score in both championship classes. I was told this happened at Bicton also, but at Narberth this was clear to see, as there was one pristine bike in the paddock on Sunday afternoon along a dirty one (and know I don’t believe him when he says he cleaned it in the interval :-). I’ve not scored points in the class where the bike is ineligible. Other people ride two or more bikes, one for each class and have not scored people out-of-class for the last few seasons. Most people will let me know when they are doing so. That the rider mentioned tried to go out in the 50+ race on Saturday when he’s nowhere near 50 and there was a full line up just says there’s no respect for riders who are eligible to race in that class.

For me the challenge is handing out trophies to people who have either cheated or who have behaved irresponsibly and with no respect to others. I’ve tolerated it in previous seasons, but not this year. I’ve been in touch with both of the above riders and they might not agree with my decision, but I feel that it needed to be made and if they’d don’t like it, well I’m happy not to include them in the Championship.

And finally, one of the other issues is riders entering online with out paying or messaging me to “book in”. There were a few riders who didn’t turn-up on the weekend (and 4 Evo riders who didn’t show up at Bicton). Going forward, online entries are only valid if you’ve paid; clubs need to cover their costs even if you decide not to ride as the weather isn’t good. 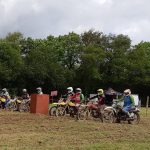 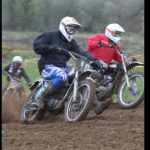 One thought on “The other Narberth”