September 18th, 6:07 am. My phone pings. “Can I ring you?” It was Sean Wilkins he had woken up on the morning Rob Morgan and I were setting off for Marum for the 2019 CMXDN with the ‘Flu.

I traveled to Merthyr and was met by a very pale, red-eyed, sniffing and coughing Sean. He looked like he needed a couple of days in bed!

“I am coming; not missing this!” he said.

We loaded Sean and his kit into Rob’s van and set out on the 577 mile journey to Marum in Holland. We stopped overnight in Bruge, camping, to refuel and to fill Sean with medicine from a local chemist

We arrived on Thursday prior to Friday prep. day of tech inspection and settling in.

If you ride at the CMXDN the race day starts early with practice not long after 8am. The day is full on from then; with practice sessions and 15-20 minute races for all classes. Therefore, it’s important to get yourself organised the day before!

This year there were for 4 teams from Wales participating in the 30 plus, 50 plus, 60 plus and 66 plus classes. This year’s team had 6 new members that have not ridden for Wales before.

The 30 plus team was a new line up, Lee Kelly, George Gorvett, Nathan Jones, Matt Morgan. None of the team had been previously involved in the Welsh teams that had start competing back in 2015 at Mortimer.

There were some strong mid-field performances but unfortunately Lee had a mechanical mishap in the last race with the Jawa Metisse giving up after worry smoke being emitted for much of the race.

The 50 plus team had some familiar faces; John Cash, Keith Roden, Sean Wilkins (first time in the 50 plus team) and a new boy, and real great find, Gary Warr riding his 250 two stroke. A 5th place from the 50 plus team, out of 13 teams. Some great team work and team riding. Well done guys!

The 60 plus team was ill-fated; with one team member not able to attend due to a family emergency, and Rob Morgan picking up an injury in practice putting him out for the rest of the meeting. Thus leaving Jess Yeats and Bob Twigg. Bob’s Methanol BSA refused to start, which led, eventually, to a trip down the main road and a bump start, but that got Bob to second practice.

The 66 plus team this year was Phil Edwards (with Brother Colin on the spanners), Roger Powell, Alan Arnott and Geoff Taylor. The 66 plus team were a little unfortunate this time out, they have had better meetings, but a strong show from Geoff and Rodger with bruised pride for Phil after a racing incident put him down the field in the second race. 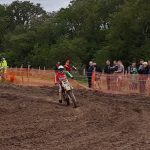 Narberth : Round 4 Report and Results