A scorching day in the sun in Abbeycwmhir provided challenging conditions for the large entry, enjoying the track that hadn’t been used for 2 years.

Lots of work had gone into the track, which with a lap time of over 2.30 minutes made it one of the longer ones seen in a while; many avoided walking the track not just because of the length but also because of the heat.

For the Pre60 and Pre65 races, it was good to see both Lee Kelly and Phil Edwards back racing in Wales, though Phil was pre60 mounted as his main bike was being repair. Malcolm Herbert had a good battle with Geoff Taylor in both races, with Geoff coming out on top on the CZ.

Alistair Devall made the trip up from Pembrokeshire and found himself locked in battle with a gaggle of BSAs in the under 350cc pre-68 class, with Phil Anslow, John Dallaway and Colin Hickie powering past the CZ on the flowing circuit.

In the over 350cc pre68 class, it was the usual domination from Rob Jones, staying well ahead of Lee Kelly (riding the Metisse out of class), Phil Anslow and the two championship contenders in Sean Wilkins and Sam Gittoes.

The pre74 upto 250cc class has been dominated by Dan Evans (525) and Ben Weaver (now running 79) and the Husqvarna / Honda Elsinore battle continues with Dan Griffiths, Dave Love and Andy Camm all joining in. However, Thomas and Jack Hibbard spoilt the party on their unsung pre74 Yamaha’s proving that these bikes can be competitive against the more expensive Honda’s. Overall honours went to Ben Weaver, just, but Martin Stephens, also Elsinore mounted, got good points to add to his total from round 1 at Narberth.

In the over 250cc pre74 class, it was the BSAs of Rob Jones, Chris Chell and Tim Dallaway against the Husqvarna of Dan Evans, with again the formers power suiting the Abbeycwmhir track well. At Narberth and Teifiside it might be a different story,

The pre78 competition this year is beginning to centre on a group of Narberth Club riders, with Tom Wells now leading the way on his Maico. The class has continued to attract a host of new and returning riders, where is provides a sensible place to ride on affordable bikes.

After some ‘away’ rounds, the Twinshock 125 contingent turned out in force and provided some great racing, with Ian Knight and Mark Beeston taking a win each. Some great battles all the way down the field in what is currently the up-and-coming class.

Jonathan Bethall leads the way in the Twinshock class, ahead of 2019 winner Rhys Edwards, with Mark Gleadhill and Dylan Davies scoring well and staying in the mix during some competitive racing.

Evo numbers were down from Narberth, but a strong performance from Ben Weaver means leads ahead of Rhys Edwards and Dan Griffiths after two rounds.

With 4 breaks for accidents, including Kevin Pettit,s unfortunate voyage over the handlebars in practice and another for track watering, as well having to field 27 races, it was always going to be a tough ask for the club to get in all of the racing. With the heat taking its toil on the line-ups for racing, the right decision was made to stop at the end of 2nd block of racing. It was already 5pm and the end of some great racing at what was a very successful event.

Looking forward to the 2018 season 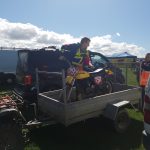